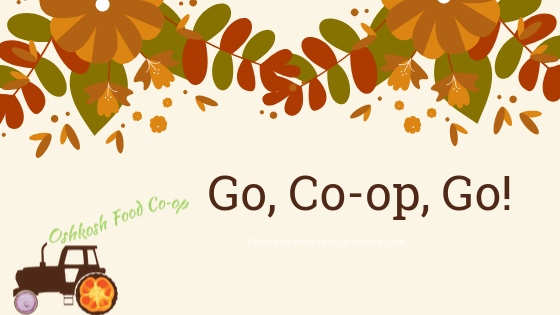 As we gear up for another Packers season, it’s sometimes fun to reflect on the history of the team. For 100 years, The Packers have called Green Bay, Wisconsin, a town with a population of just over 100,000 people, home. Despite pressures to move to bigger markets that contain more people who could call themselves fans, The Green Bay Packers have remained loyal to the community that gave them life.

Why are The Green Bay Packers so loyal to Green Bay? Is it because the team is called The Green Bay Packers? No, that’s not it. The name in front of the team could easily change (think of the Cleveland, then Los Angeles, then St. Louis, then again Los Angeles Rams). Keeping up with the name changes of these teams can be as difficult as keeping up with the Kardashians. A name of a team can easily be changed when the owner decides to move the team from one city to another.

So what is it? Well, it’s simple. The Green Bay Packers are community owned, just like the Oshkosh Food Co-op. The Packers remain loyal to Green Bay because they aren’t owned and controlled by one person. The owners have a say - all 361,169 owners to be exact. With ownership of the team spread across many people, they all play a role in keeping the team successful and close to home; the same applies to Oshkosh Food Co-op. It truly is an anomaly that The Green Bay Packers have remained resilient in the smallest market in professional sports in North America. They have such a loyal fan base that they have sold out every game since 1960. This helped to not only create a one of a kind community in the sports world, but also to ensure the team stayed right there in Green Bay, even during the “drought era” that lasted from 1968-1991.

Food Co-ops and The Green Bay Packers have a lot more in common than you’d think. For example, the Green Bay Packers are the only American major-league sports team to publicize their financials every year. Similarly, as a member of the Oshkosh Food Co-op, you have financial transparency through the Annual Report and Annual Meeting each year. Also, similarly to how The Packers generate dollars that enter and circle among the community over and over again, so do food co-ops. The Packers are also governed by a board of directors, who appoints an executive team. Sound familiar? Each year you vote for your board, who then appoints committees to help get the work done.

As The Packers have many owners, so do cooperatives. Ownership lies in the hands of those in the community, and instead of leaving the fate of the store in the hands of one owner, the community that shops the store is loyal, invested and makes key decisions. As mentioned, Green Bay Packers fans are so loyal, they’ve had a sold out stadium for over 50 years. That same loyalty in Oshkosh Food Co-op is represented time and time again, from our previous Grow-op successes to the recent expansion of new members, bursting us right past the push to 1,000 members. Green Bay Packers fans show up on game day, and Oshkosh Food Co-op fans do too.

As another amazing Green Bay Packers season gets underway, I hope you enjoy cheering for The Green Bay Packers in a new light. Like the Packers, a co-op is about supporting those around you, and being a part of the community for the long term. Here’s to another 100 years in Green Bay, Green Bay Packers, and here’s to being one step closer to opening the doors at our Oshkosh Food Co-op, in Oshkosh.